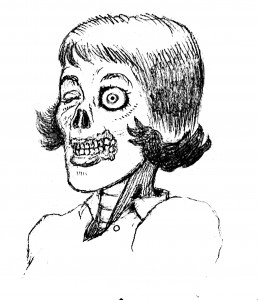 Join us on October 31st for our Librarian Zombie Walk to City Hall!!!

Our library budgets have already been cut to the bone, and these further reductions in funding will just degrade library service further. We’ve already lost Saturday Service in most of the city.  It’s likely these cuts will be the end of what we have left.  So those working parents taking their kids to the library on the weekend? Tough, not open. Can’t return your books during the week because you work 60 hours just to live? Tough, closed on the weekend.

What does any of this have to do with zombies? Well, without libraries there are simply no brains, and zombies need to eat brains to live.  So New York’s zombie librarians will be walking across the Brooklyn Bridge to City Hall this Halloween to protest these drastic cuts to their food supply.

Meet us in  the circle at the west end of Cadman Plaza in Brooklyn, next to the High Street A, C  Station at 11am on October 31st.

Dress in your  Librarian Zombie best,  and come help us bring attention to the continuing cuts to the libraries, and the elimination of the yummiest brains in the city, those of  Library Users.

Check out more zombie support for libraries at http://www.zombiesforlibraries.com, those guys are awesome.