Why We Still Fight

Once more the city budget has hacked at the city library budgets and once again we will push back to get the money reinstated. It is euphemistically called “the budget dance” and we make a lot of very easy quips and jokes about it. They almost write themselves. There are those who are confident in a budget restoration, who feel secure that this is all part of a game of brinksmanship that is being played. 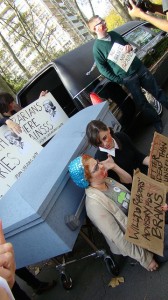 I don’t agree. Right now the library budgets are the biggest single number on the table in the budget debate. It would be simplicity itself to restore a small part of the library budget and pay out a lot of other agencies. This would prevent pols from looking like anti literacy ogres and yet would also allow them to spread the damage of a nasty budget cut around.

Frankly, in a good year, there might be some librarians who would be fine with that. The argument could be made that libraries are a smokescreen for smaller agencies who are cut because they lack our lobbying power and PR machine. Many librarians are uncomfortable with the cuts to agencies across the city and, in times of fat budgets, would willingly share. 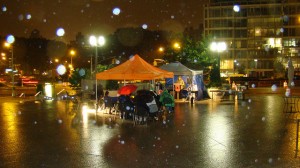 Unfortunately we are looking at libraries which are laboring against consecutive years of cuts. The staffing remains at a bare minimum with many community libraries understaffed. Hundreds of library jobs remain on the books despite at least three years of MLS grads cooling their heels in the city waiting for a shot to actually just work dammit. Staff is stressed and programming and collection suffer. The libraries are doing more and more and more and more all the time and they are doing it with less and less. The argument could be made that this has benefit as a way of weeding redundancy and making the libraries leaner. As someone who has, you know, worked in libraries I can tell you that it taps and stresses staff and diminishes the potential of the public library. 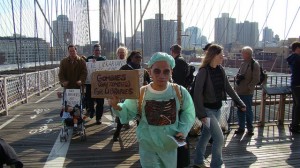 Here is the kicker folks. Yeah we got socked with a big cut and yeah it would be great if that all came back to us but nothing says that it HAS to come back to us. There are LOTS of other people who would like a slice of that pie. There are plenty of people who need those funds plenty of organizations who would benefit if we don’t get the money back.

Two years ago the fight was thick and crazy and we ended up losing some jobs, about sixty all told across the three libraries, and you would have thought that Dewey himself had been pilloried in Times Square to hear people talk about it. A few years later, a few fights later, a few rounds of cuts later, and suddenly everyone is sure that it will all come back to us again. 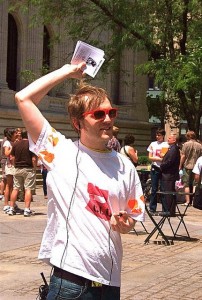 Are you cool with another sixty cuts? How about a hundred and sixty? How about five hundred and sixty? How many libraries are you OK with closing? Are you OK with there being no access to libraries whatsoever on Sundays in the entirety of at least one borough in the city? Yeah yeah you say, the usual scare tactics, the usual hyperbole. Folks, it ain’t hyperbole if it is true. Do the math, look at the numbers, we are looking at massive changes in the shape of libraries and librarianship if these go through.

So what will you do? You, yes that is right, you. What will your part be in this? Will you stand world weary and watch as the collections get thinner and thinner, weaker and weaker? Will you sit and watch while the libraries are shuttered? Will you hang back as hours are cut back? 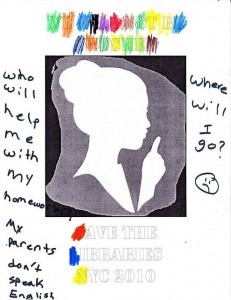 Who will speak for the quiet people? Who will shout for storytime? Who will stick up for teens who want to have a space to be quiet and draw or write or just escape being freaking hassled all the damn time man? Who will stand for the seniors? Who is going to the mat for the unemployed? Who is willing to struggle for the smelly homeless guy who forgot what dignity was years ago but has a corner in the stacks that keeps him rooted to this Earth?

It’s a month people. It is just enough time to break a sweat and get a good mental workout. You can meet some people, make some memories, possibly find somebody cute if you are looking for them. This advocacy stuff is really a lot of fun and if you believe in libraries, if you really genuinely think they do something in this world, then prove it and do something. It is one month, just enough time for you to become a hero. 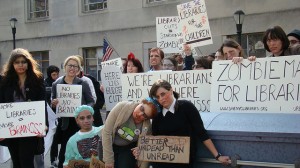