YAY! The NYC Council and Mayor Bloomberg have worked out a deal that restores 90 of the 96.4 million dollar proposed cut!

This restoration guarantees at least 5 day service and no layoffs, so who has two thumbs and is taking a few weeks to chill before she starts talking about how awesome libraries are again? This girl. That’s who!

New York State pulled off a sweep at the 2012 ALA Battledecks competition last night in Anaheim!

Rebbekah Smith Aldrich took Runner Up AND Audience Choice! She’s part of ULU even if she does live in the Hudson Valley because I say so. 😉 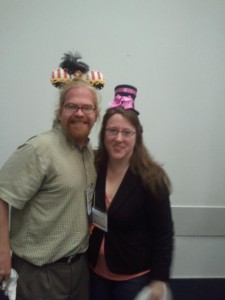 Here they are looking all adorable and winnery. (Yes I know that’s not a word, I made it up, so it is now.)

No one brings it to a competitive public speaking  competition like New York.  Battledecks @ NYLA 12 anyone?