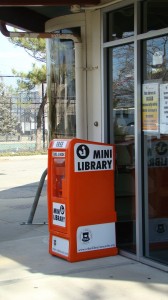 Urban Librarians Unite is pleased to announce its own small network of little libraries. These bright orange newspaper boxes have been set up outside of library branches in Brooklyn and Queens closed due to damage from Hurricane Sandy. These tiny, all-weather libraries house about a hundred books each at a time and there is no expectation whatsoever that the books need to come back. 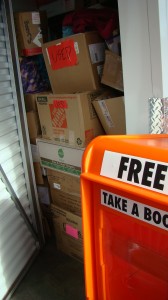 These Mini Libraries are a great way to get reading materials out to those who are still recovering from the storm. It is still an utter mess out there and a lot of people are still struggling. These books are a tiny spark of entertainment, they provide some distraction, and they remind people that the library has not forgotten them or their community. Our Children’s Book Campaign has been wildly successful and we have thousands of books to distribute. These little libraries are a direct pipeline to the public, a way of putting books right into their hands.

Some of us at ULU have had a very complicated relationship with the little library movement. As library professionals it can be difficult to see a static pile of books referred to as a “library.” While the circulation model is synonymous with the modern library it is, in some ways, the least of the work that we do. Yes, it is important to circulate information and entertainment and free access to take these materials away is at the heart of the library compact with its patrons. For many of us however the essence of the work is finding the RIGHT book. That is what drives us. It becomes difficult to embrace the little library movement when that aspect of service is removed. A library without a librarian is a pile of books. It lacks a life spark, an essential curation component and thus a dynamic inspiration. 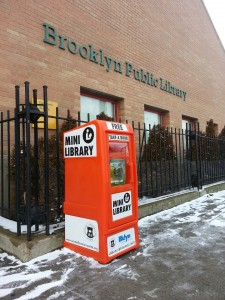 The fear that library advocates have is that these little libraries will be seen as an alternative to public libraries. Why should taxpayers pay for a service that they can set up in their own front yards? What happens if the public decides to create these themselves and the public library is lost, diminished, or forgotten? This fear is, upon reflection, a juvenile one. Nobody could mistake any of the hundreds of delightful little libraries out there for that of a professionally run public library. Advocates of little libraries are often rabid supporters of big libraries as well and it is their respect for the institution that makes them want to emulate it. It is impossible to mistake a citizen’s reading exchange for a well run reference desk. 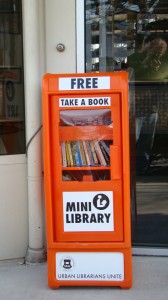 Our Mini Libraries will suffer from the same limitations as any little library. They could never be mistaken as an alternative to the branch libraries they substitute and intended to support. They do offer some comfort and succor, especially to kids and families, and they remind people that libraries–and their librarians–are nimble, caring and quick to respond to the needs of their communities.

We hope that our Mini Libraries will evolve. They are out and working but we want to augment them as we go as well. Should we put counters in them so we could track how often they are being used? How about if we could install some lighting? Let’s take it further and directly attack the base limitations on the little library model. What if we had teams dispatched to the Mini Libraries for a few hours on the weekend so people could get direct reference and library services? What if, as well as providing information and entertainment in the form of books, these libraries were transformed into library advocacy resources where people could get information about what was happening with their library and how they can support it? What if we could install a Library Box in each unit so in addition to being a repository for physical books each Mini Library can provide digital resources in a wireless radius around itself?

The Mini Libraries are a resource for our communities, a chance to experiment in library science, and a reminder to the public that even if the library itself is in ruins, the librarians are still thinking of them. We are excited about the possibilities and hope you will join us as we try new things with our teeny tiny libraries. 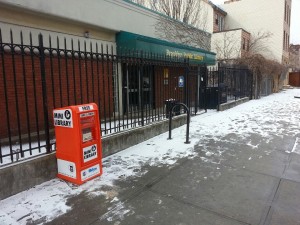