Net Neutrality and some FCC BS

The FCC is set to vote to eliminate net neutrality this December. Urban Librarians Unite joins the dozens of organizations denouncing this action.

Open access to information and the unbiased dissemination of information is critical to democracy and education. The “Restoring Internet Freedom” proposed rulemaking of FCC Chairman Pai focuses on how the Internet flourished for two decades of “light-touch regulatory framework.” It didn’t flourish for Americans. During those two decades we saw the exponential increase in the digital divide that left rural Americans disconnected and we saw Internet Service Providers (ISP) interfering with their customers’ access to certain information. 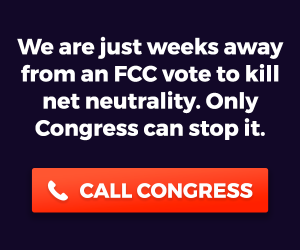 If you’re a relatively moderate consumer of news and occasionally take a peek at social media, you may see a lot of threads and posts about #NetNeutrality, or #SavetheInternet — and it’s a big fucking deal.

So here’s the deal with Net Neutrality – the Federal Communications Commission (FCC) currently requires internet service providers to treat all online data equally. As in, they can’t charge more for highly trafficked sites, they can’t slow down service to others, provide preferential treatment to certain sites, or prioritize access to others — if it’s an ISP, they have to provide the same level of connectivity that is being paid for across all of the internet. This ensures that there is a level playing field for everyone on the internet.

(Disclaimer: that last statement is very generally speaking and in reference only to Net Neutrality — lots of other advantages do exist to companies and content creators online, but at the very damn least, access to their site and to another site that has less attention would be equal.)

Led by FCC Chairman Ajit Pai, the Republican majority FCC now wants to roll back this order; they’re set to vote on it by December 14.

Want to know what that may look like?
Business Insider already drafted that up for us, with a bit of an in-depth look into how Portugal allows mobile data providers to handle their business. Basically, Meo, Portugal’s wireless carrier, charges for access to different apps on a tier

Portugal customers of MEO’s tariff pay for the proprietary apps, but for varying big name social apps, they have to cough up additional costs per month.

It happened here. Without net neutrality, our access to applications varied with the network we were connected to. In 2012, AT&T blocked Apple’s FaceTime application for users connected to its network. Users were allowed to access the application once they connected to a different network. FCC Notice of Proposed Rulemaking in re: Protecting and Promoting the Open Internet at 41.

And that’s just one example of how it reversing this order can turn out.

What if ISPs decide that certain sites don’t align with their political/religious/social views?
Without the Net Neutrality order, they could theoretically block access to sites like YouTube, Facebook, or even your own blog where you spew of these radical ideas of how libraries are important as fuck.
Or your digital portfolio, or your online resume…. Or your LinkedIn because there are certain companies there that they don’t agree with or haven’t paid a fee to them…
And on and on and on and on.

Net Neutrality means no blocking, no paid prioritization, no cherry picking which sites or apps get ‘fast lane’ access.

And for those assholes that say that this is all theoretical? Remind them that they’re eliminating the power of choice and they are basically making it legal for companies to silence your free speech and the free speech of others.

Don’t let this corporation-dominated FCC pull one over you.

Save the fucking internet.